Well while studying for my VCP5 I have discovered that the “Solution/Database Interoperability” support matrix for vCenter databases is not quite as straight forward as I would have expected. For instance, MS SQL Server 2008 Enterprise R2 SP2 is only supported with VMware vCenter Server 5.0U2.  For MS SQL Server shops, it appears as if the currently “safe” DB options are MS SQL Server 2008 R2 (no SP) and MS SQL Server 2008 SP2. These appear to have the broadest support – of course if you are installing vSphere 5.0U1 or U2 (which you probably should be) then you can use R2 SP1. Once more, it pays to check the HCLs carefully. You can determine the version and service pack level of MS SQL Servers using the information in KB321185 from Microsoft.

And for Oracle support – that is a bit of a minefield too. Various versions of 10gR2 and 11gR2 are supported with various patch sets. Once again, do you homework carefully!

Well, in short the GIGABYTE G1.Sniper M3 motherboard does support Intel VT-d and both ESXi 5 and 5.1 can use it. I have tested this with BIOS version f9 and “beta” BIOS versions f10c, f10d and f10e and all show VT-d as an option when a compatible processor is installed. Note that this option is not shown unless a suitable (generally Intel i5 or i7 non-k CPU) processor is installed. The “VT-d” option is shown below the “Intel Virtualization Technology” option on the “BIOS Features” page of the BIOS setup.

I have had mixed success with actually passing through devices to VMs. Generally the cards in PCI-E slots and configured for pass through worked as expected within a VM during my testing (USB3, NICs, Hauppauge 1700 cards). However, devices on the motherboard (SATA, Audio, LAN, Video) and PCI-E graphics cards do not work. For the most part, these devices pass through but the devices don’t start under Windows, drivers fail to attach or cause blue screens when accessed (yes, Mr ATI graphics card with your atikmpag.sys driver BSOD).

Until I actually did these tests I was not sure if this motherboard did or did not support VT-d /Intel Virtualization Technology for Directed I/O / VMware VMDirectPath I/O. I already had this motherboard in a HTPC with an Intel i3 (dual core with hyper threading) which, by the way, ran ESXi adequately. I wanted to play with VT-d so  I took a punt on an Intel i7 processor and luckily it worked. If not, my backup plan was to also procure an ASRock motherboard, most of which seem to have working VT-d support.

I had hoped to run a virtual HTPC with an ATI graphics card passed through on this computer. Unfortunately the virtualisation gods do not seem to be happy with this idea at the moment. Still, this box makes a decent whitebox ESXi host, apart from the onboard Intel 82579V NIC which ESXi does not support out the box. A custom driver needs to be injected into the ESXi installation ISO, unless you have a supported PCI-E NIC in which case the driver can be installed post-install.

Note1: While playing with passthrough and various options of internal graphics and PCI-E graphics BIOS configurations I got to the point where I could no longer get graphics from the onboard graphics card. I found a couple of posts on the Internet about this too. Even resetting/clearing CMOS did not resolve this. As per the other posts, I reflashed the BIOS and it sorted it out. Weird behaviour and unexpected – I could not get the BIOS to save the option to use IGFX (Internal graphics) rather than PEG (PCI-E graphics) as the “Init Display First” option.

Asus ATI Radeon HD 5450 – passed through and seen by VM but has atikmpag.sys BSOD 0x0116 “Attempt to reset the display driver and recover from timeout failed.” whenever I connected the monitor to the graphics card or tried to enable the display on the card.

Asus NVIDIA Geforce GT610 – passed through and seen by the VM. However the device driver is unable to start in Windows.

Note3: While trying to get the graphics cards to work properly I tried various combinations of additional/advanced settings including:

On the host, edit of: /etc/vmware/passthru.map by adding

Note4: In ESXi5.1 ACS checking is enforced more strictly resulting in quad-port NICs (and other devices apparently) not successfully getting configured for passthrough. After each reboot the devices still show as needing a reboot. The console logs show a message similar to:

This can be bypassed (at your own peril) using the host advanced option: disableACSCheck=true
Use the vSphere console: Configuration/Software/Advanced Settings/VMKernel/VMKernel.Boot.DisableAcsCheck
More info can be found at this informative post. This option got the quad port NICs passed through successfully but did not make any difference to the ATI or NVIDIA cards.
Note5: Currently ESXi 5.1 upto and including build 914609 does not seem to allow USB controller passthrough via VMDirectPath I/O. You can select the device for passthrough but once the host is rebooted, the device is unselected. I am not sure if this is a bug or a conscious decision by VMware. A cynic like myself might think this is intentional, as without the ability to pass through a USB controller there is no way to pass through a real keyboard and mouse into a VM and hence no need to get GPUs working with passthrough. (Hmm – maybe a bluetooth USB device passed into a VM and then paired with a BT keyboard and mouse?? Something for another day).

In what possible dimension are the following not complex enough passwords for a user time-sheet system?

How is anyone meant to remember passwords of this complexity? This is a security oversight as these passwords will get written down somewhere thereby bypassing all the intended security! Oh, and I need to find a new password of this complexity every 28 days!

ps: I won’t be, and neither should you, using these passwords anywhere.

Well I’ve done a few “winter” runs recently with the temperatures hovering between 1 and 5 degrees celcius. They have been chilly runs and I’ve had to wrap up in several layers to stay warm. On the plus side, I’ve not had to run in any rain, sleet or snow yet this winter.

The fun thing I’ve been doing to help pass the time and not think about being chilly is to look for Christmas decorations and lights. In the past week or so I’ve seen many more Christmas trees through windows and other assorted Christmas decorations on front doors and around houses. It really does make running in the cold more pleasant.

Well last night’s lake swim will be one of the last of the season I guess. Too dark too soon.  The swim itself went ok, only 1000m before I decided to call it a night. I did notice my wetsuit rubbing on my neck though, which it has not done before. Maybe it was trying to make me faster by dragging me by the scruff of my neck? 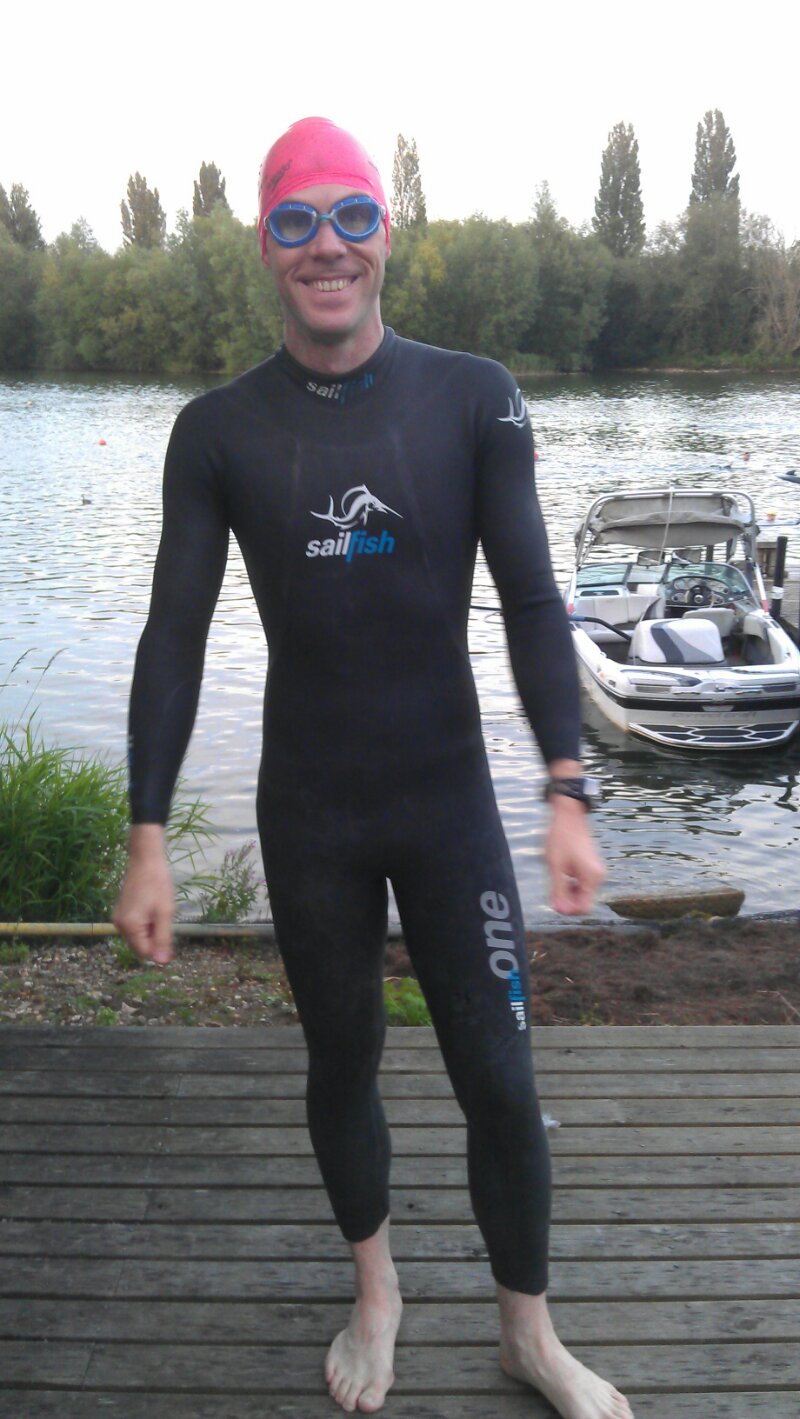 I’ve got three weekends of racing ahead before my tri season ends. Once the races are over I’ll ease off a bit while trying to keep things ticking over. Maybe a late in the year 10km before a short break. After the break the training will resume in preparation for next year’s big races….

Just listening to New Order’s “Crystal”. Brings back many fond memories of Filthy’s, late tipsy night’s and the fateful day that was the concert in Finsbury Park.

That day consisted of rain, rain and more rain, right up until New Order came on stage. A good review is here.

Ahh those were the days, over 10 years ago….

Here is an interesting article (Ref BMJ 2012;345:e4737) from the British Medical Journal which discusses the need, or lack thereof, for sports drinks during exercise and endurance activities.

The long and the short if it, according to the article, is that the necessity for sports drinks has been overemphasised by the sports drinks industry. It appears, from the article, that there is not much really relevant research into the relationship between hydration, sports drinks, performance and general health. The conclusions one can actually draw from the research also hinge on the subjects within the tests – real endurance athletes and their sports versus “everyday-Joes” doing 15-30minutes of exercise in the gym.

I guess my take on it is drink some water for activities lasting less than an hour and drink some sort of drink containing some calories and electrolytes when you exercise for more than an hour. It seems to work for me – for rides longer than two hours I tend to consume 200-400kCal per hour depending on what and when I’ve eaten and what training I have planned for after the cycle. Then there are the race-like training sessions where I try and dial in my hydration and nutrition to match race day prep.

Anyway – read the article (and associated comments) and decide what you think. Let me know your thoughts on this. I’m going to try and find some other articles discussing this and if I find any that I think are useful I will post a follow-up.

Here is a link to a useful Runner’s World chart to assist in choosing your next running shoe.

Usual disclaimers apply, but it might give some insight into some shoes one may not normally consider.

Hope you find them interesting and/or useful.

Well I thought I ought to sort out my laptop to connect to my CompuTrainer for the upcoming winter indoor training which ought to take place. As it turns out, I ran into a few issues as my laptop has been rebuilt since I last used the CompuTrainer connected to my laptop. I’ve been using the CompuTrainer handlebar control for varying the power rather than courses or 3D videos.

Anyway the bits of software I’ve installed are:

Download and install into C:\ aswell. This is now free.

Without this update I was unable to view/edit 3DC files, as described in the forum post. The error in the application’s fatal.log file was:

This is a great piece of software which allows one to convert .gpx files into .3dc files which can be “ridden” using the CompuTrainer 3D software.

I am considering getting the updated RacerMate One software which has recently been released. I do wonder how useful it wil be though. Hopefully DC Rainmaker will do an indepth review of the software in the near future.